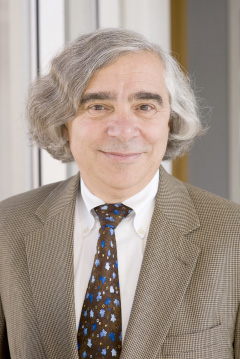 Ernest J. Moniz is the Cecil and Ida Green Professor of Physics and Engineering Systems, Director of the Energy Initiative, and Director of the Laboratory for Energy and the Environment at the Massachusetts Institute of Technology, where he has served on the faculty since 1973. Dr. Moniz served as Under Secretary of the Department of Energy from 1997 until January 2001 and, from 1995 to 1997, as Associate Director for Science in the Office of Science and Technology Policy in the Executive Office of the President. At MIT, Dr. Moniz served as Head of the Department of Physics and as Director of the Bates Linear Accelerator Center. His principal research contributions have been in theoretical nuclear physics and in energy technology and policy studies. He serves on President Obama’s Council of Advisors for Science and Technology (PCAST) and was named to the Department of Energy’s Blue Ribbon Commission on America’s Nuclear Future as of January 2010.

Dr. Moniz received a Bachelor of Science degree summa cum laude in physics from Boston College, a doctorate in theoretical physics from Stanford University, and honorary doctorates from the University of Athens, the University of Erlangen-Nurenburg, and Michigan State University. He was a National Science Foundation Postdoctoral Fellow at Saclay, France and at the University of Pennsylvania. Dr. Moniz is a Fellow of the American Association for the Advancement of Science, the Humboldt Foundation, and the American Physical Society and a member of the Council on Foreign Relations. He received the 1998 Seymour Cray HPCC Industry Recognition Award for vision and leadership in advancing scientific simulation and, in 2008, the Grand Cross of the Order of Makarios III for contributions to development of research, technology, and education in Cyprus and the wider region.