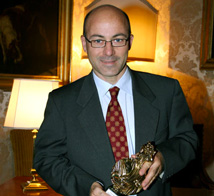 Since 2005, Roberto Cingolani is Scientific Director of the Istituto Italiano di Tecnologia (www.iit.it).
Born in Milan in 1961, he graduated in Physics in 1985 at the University of Bari where he later obtained his PhD in Physics.
In 1989 he got a post-graduate degree in Physics at Scuola Normale Superiore in Pisa. Staff member at the Max Planck Institut für Festkörperforschung in Stuttgart (Germany) from 1989 to 1991, he became associated Professor of Physics at the University of Salento in 1992, where in year 2000 he was nominated Professor of General Physics at the Engineering Faculty. During 1997 he was Visiting Professor at the Institute of Industrial Sciences at Tokyo University (Japan) and the year after at Virginia Commonwealth University (USA).
In 2001 he was the Founder and Director of the National Nanotechnology Laboratory (NNL) of INFM at University of Salento. From 2000 to 2003 he was executive Vice-president of the National Institute for the Physics of Matter (INFM).
Roberto Cingolani’s scientific activity focuses on Materials Science, Nanotechnologies and Nanomedicine. He is author and co-author of about 700 papers on international journals, holds about 30 patents and started 3 spin-off businesses.