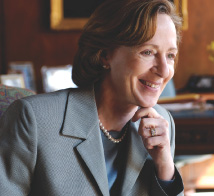 Susan Hockfield is MIT’s 16th president. Before joining the Institute in 2005, she was Yale University’s provost, appointed to that post after serving as dean of Yale’s graduate school. She is a neuroscientist and specializes in the developing brain.

The first life scientist to head MIT, Hockfield is a leading advocate for science and technology as well as for U.S. research universities. She is also a committed educator. She worked hard to improve the learning environment for Yale’s graduate students, and is outspoken on key issues related to both undergraduate and K-12 schooling.

Hockfield’s MIT priorities include enabling its Schools, departments, and research labs and centers to keep the Institute at the leading edge of innovation. She believes strongly in a major role for international students and scholars in American higher education, and in the need for U.S. universities to collaborate with leading academic centers worldwide.

Hockfield is a University of Rochester graduate with a Ph.D. from the Georgetown University School of Medicine. She did her doctoral research at the National Institutes of Health. She was an NIH Fellow at the University of California at San Francisco in 1979 and 1980, subsequently joining the staff at New York’s Cold Spring Harbor Laboratory.

MIT’s president was named to Yale’s faculty in 1985. In the course of studying the developing brain, she has also explored glioma, an often fatal brain cancer, making discoveries that may lead to new treatments for the ailment.
In addition, she has identified a natural agent that plays a key role in shaping the developing brain’s internal structure.
As head of Yale’s graduate school, Hockfield dealt with important issues regarding academic and financial support for graduate students. As provost, she helped shape Yale’s major thrusts in science, medicine, and engineering, including spearheading a $500 million facilities initiative. She also fostered new interactions among the humanities, social sciences, and natural sciences.